Today DUFAS, together with the other associations in the financial sector - the Dutch Banking Association, the Dutch Association of Insurers and the Federation of the Dutch Pension Funds - has put its signature under a commitment to actively contribute to the Dutch government's climate goals. The signing took place in the presence of Minister of Finance Hoekstra. In addition to the associations, more than fifty financial institutions have signed the commitment.

The aim of the Climate Agreement is to reduce greenhouse gas emissions by 49% in a cost-effective manner compared to 1990. The financial sector commits itself to the goals of reducing CO2 emissions. To this end, it will draw up action plans and report annually on the climate impact of financing and investments.

With signing, DUFAS indicates that as an umbrella organization for asset managers it supports the commitment, coordinates the deployment of its supporters where necessary, and plays an active role in an annual review of the progress of the implementation of the commitment arrangements.

As part of the commitment, DUFAS, the Dutch Association of Insurers, the NVB and the Pension Federation are organizing conferences. The first conferences have already taken place. At the beginning of this year, the first working conference was organized by the Dutch Banking Association with the theme of raising awareness of climate risks. Last month, the Dutch Association of Insurers welcomed over 150 visitors for the second edition. During this session the emphasis was on working together to be able to measure the impact of financing and investments. The third session is scheduled for early next year. 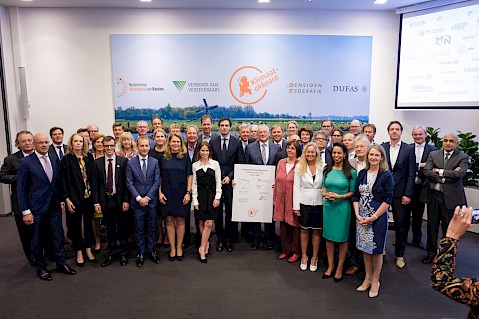